Today's post is for the birds. Literally for the birds. And knowing his interest in birds (and specially baby birds), I'm sure Max will enjoy the post.
The Glossy Starling (Lamprotornis nitens) is a fairly common bird in our part of the world. When we pulled into our camp spot at Cannon Rocks between Christmas and New Year one of the first things I noticed was that there were four glossy starlings that were very active around the area and specially making a huge racket in the tree next to our braai (barbecue) area. 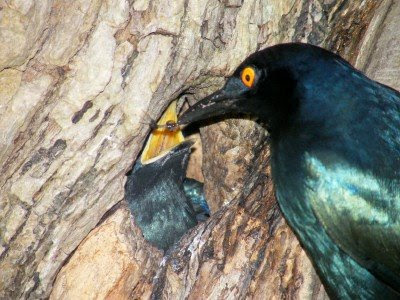 On closer inspection I saw that there was a hole in the tree with two starling babies in it and the adults were feeding them. Why there were at least three of the big ones feeding I don't know, but I realised that it was a birding photo opportunity like I haven't had in a while. I barely set up my tripod and I was rewarded with this pic of mama (or papa, who knows) feeding the one baby with what looked like an insect of some sort. 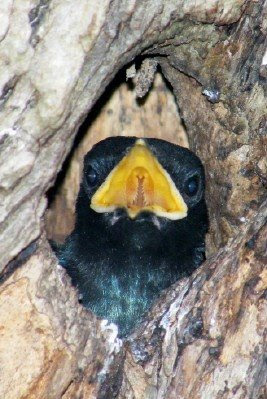 The babies were very shy and only peeked out every now and then, make a huge noise which I took as something like: "Where's our food!" By now the adults had noticed me and was a bit wary to just fly up to the nest, selecting to rather first hop around the tree for a while before approaching the nest. At one stage one of the babies peeked out and give me a scolding look. Check out the inside of his mouth. Its like something from an alien movie. 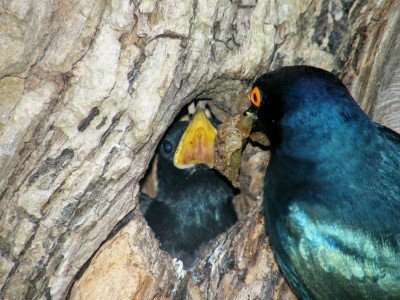 Shortly after alien boy was rewarded for his bravery with a big piece of something. Don't ask me what it was cause they came with everything from insects to pieces of cream crackers they obviously raided from a tent. I was really chuffed with the picks and it will probably be a while before I get such an opportunity again.
Posted by Firefly the Travel Guy at 5:26 PM

Email ThisBlogThis!Share to TwitterShare to FacebookShare to Pinterest
Labels: birds