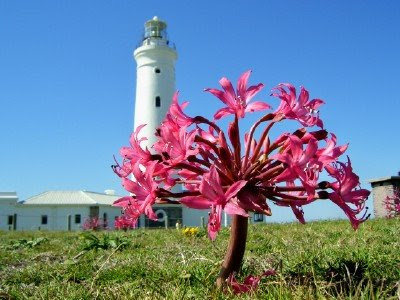 The Candelabra Flower grows from a bulb which means that you don't know its there till it flowers. This pic was taken at Cape St Francis with the Seal Point Lighthouse in the background. The coffee shop and lighthouse tours are run by the Ajubatus marine bird and mammal rehabilitation project and they put up signs all over the show asking people not to pic the flowers and specially not to carry the dead flowers away as that is the time they drop their seeds for future generations.

I am heading for China tomorrow. We are exhibiting in a tourism and cultural festival in the city of Ningbo. Ningbo is Nelson Mandela Bay's twin city and they invited us to come and participate. I don't normally travel this much in my work, it's just that this is turning out to be a busy two months. Hopefully by late October I will be able to settle down again and *holding thumbs* take my tons of overtime leave. Anyway, I will be back again on the 2nd of October with what I am hoping will be tons of nice pics. Check you all later.
Posted by Firefly the Travel Guy at 8:25 PM