In yesterday's post I mentioned the Prince Alfred's Guard Mermorial. Prince Alfred was the second son of Queen Victoria. He visited the Cape Colony on two occations. He visited Port Elizabeth in 1860 and St Georges Park was inaugerated on the first anniversary of his visit. For his visit a military guard was formed to accompany him on his visit. The guard was not disbanded afterwards and continued to exist. This Memorial was erected in 1907 in memory of men from the guard that died in 4 different wars, one of the the Anglo Boer War (or South African War) fought between 1899 and 1902. 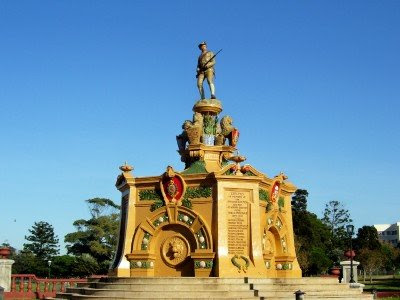 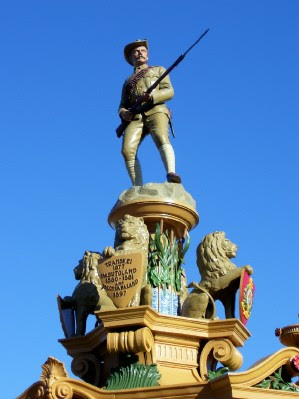 The figure on the top represents a member of the Guard, while the four lions hold shields with the names of the wars as well as the Guard's coat of arms.
Posted by Firefly the Travel Guy at 5:28 PM