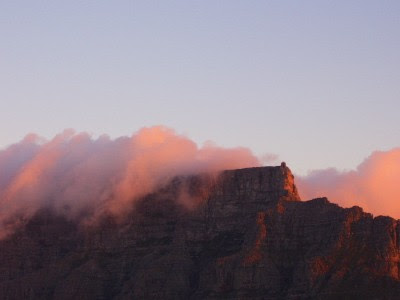 One of the most famous landmarks in South Africa is Table Mountain overlooking the city of Cape Town. Cape Town is situated on the south western end of the continent and South Africa's most saught after destination. Cape Town is situated about 750km from Port Elizabeth and the area in between is known as the Garden Route. I don't get to Cape Town nearly enough, but when I was there three weeks ago I got to do some sightseeing with my camera. This pic was taken just before sunset as the clouds started coming over the mountain. The glow of the sun coloured the clouds pink and gave the ideal opportunity for a pic.

Posted by Firefly the Travel Guy at 10:04 PM