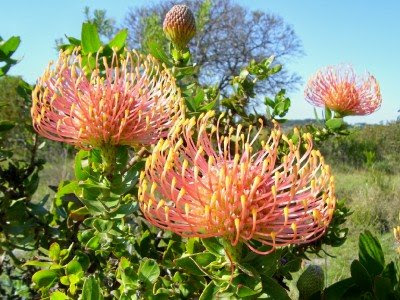 The pin cushion protea is on of the 8500 species of plants that you find in the Fynbos biome. This plant kingdom is also called the Cape Floral Kingdom and was proclaimed an UNESCO natural World Heritage Site a couple of years ago. Six nature reserves were selected to represent the status. Five of those are in the Western Cape and one in the Eastern Cape. The Eastern Cape one is the Baviaanskloof Wilderness Area about 100 odd km west of Port Elizabeth. This photo was taken in the Van Stadens Wildflower Reserve, also just west of the city.

Posted by Firefly the Travel Guy at 7:08 PM