Today I decided to post a couple of giraffe pics. Both were taken at different game reserves and are different types of photos. Giraffes are facinating animals. The tallest mammal in the world with the longest neck, yet they only have 7 vertebra (the same as a human). To get blood up that neck and to the brain, they have a heart as big as a soccer ball. This poses a problem when they drink water, because dropping the head down could cause a sudden rush of blood to the brain. To avoid that they have a valve system that controls the bloodflow. Giraffes are also the youngest bungi jumpers in the world. The mothers stand up while giving birth and the babies fall the 2 meters or so to the ground which also snaps the ambilical cord. Lastly. What do you call a group of giraffes? The answer is at the bottom of the post. A young giraffe eating in the Kragga Kamma Game Park just outside Port Elizabeth while his older brother is keeping an eye on the tourists. 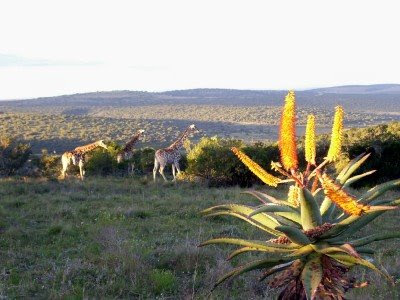 A couple of giraffes in the Schotia Private Game Reserve, about 50km outside Port Elizabeth, walking off just before sunset. The plant in the foreground is an Aloe Ferox.

A group of Giraffes are called... A Journey of Giraffes.
Posted by Firefly the Travel Guy at 9:30 PM