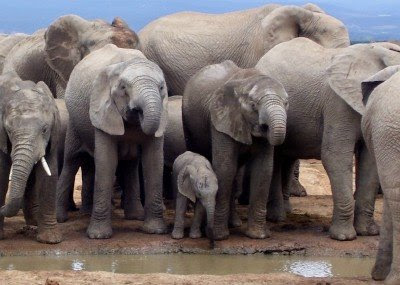 Port Elizabeth is situated in the Eastern Cape province of South Africa. The area to the north and the east of Port Elizabeth is prime big game country with numerous private game reserves on offer in a malaria free environment. Most of the game reserves have some or all of the Big 5 and offer accommodation ranging from rustic to luxury 5 star. The biggest attraction in the area is the Addo Elephant National Park, less than an hour outside Port Elizabeth. Tagged as the first Big 7 game reserve in the world, it can boast the Big 5 (elephant, buffalo, rhino, lion and leopard) as well as Southern Right Whales and Great White Sharks within its concervation area. It has a population of over 450 elephants and is probably the best place in the world to see wild African elephants up close and in big herds. When I used to be a tourist guide I went to Addo so many times,that I can't count it, but I never got tired of it. This is one of my favourite pics that I have taken in Addo. More Addo pics as well as pics from the game reserves will follow in the furure.
Posted by Firefly the Travel Guy at 8:55 PM