Grahamstown is situated about 130km east of Port Elizabeth. It is the biggest town in frontier country and the place where most settlers moved to once they were allowed to leave their farms. It started out as a garrison town named after Col John Graham. It was they sight of the Battle of Grahamstown in 1819. 5000 Xhosa warriors under the command of Makana gathered on the hill overlooking the valley in which the settlement were. The fort was manned by 350 British soldiers. Makana told his warriors that the bullets of the white man will flow over them like water. They broke their throwing spears and charged down the hill. The first volley of shots rang out when they were about 40meters away. Bullets did not flow over the warriors like water and the water of the Kowie River ran red with blood. During the battle the British were starting to run out of gunpowder. A woman named Elizabeth Salt walked from another fortified building through the Xhosa ranks with a keg of gunpowder hidden under her dress. The Xhosa thought she was pregnant and they would not harm a pregnant woman in battle. She helped the British to win a very important battle in the pre-Settler days. 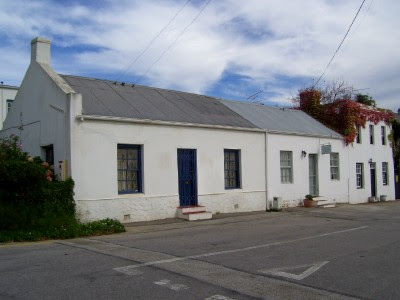 When the settlers started moving into the towns, they went back to doing what they did back in England before they came to the Cape Colony. I Grahamstown a lot of the settlers built their house in an area known as Artisan Square. Their houses were typical Settler houses with two front windows, a door and a chimney. They look like the kind of house a child will draw. 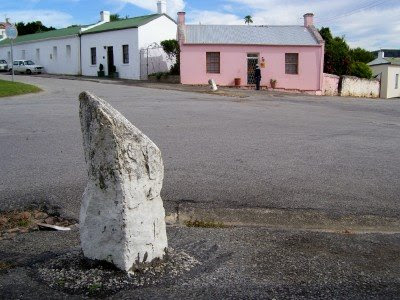 In the old part of Grahamstown you will find white stones on a lot of the street corners. You will also find that the corners were designed at angles and not right angles. The reason behind it was ox wagons. When you have a wagon pulled by between 8 and 16 oxen, it was easy to miss judge a corner and slam into a house with the wagon. For this reason big "wagon stones" were put on the street corners to stop the wagons from damaging the houses. 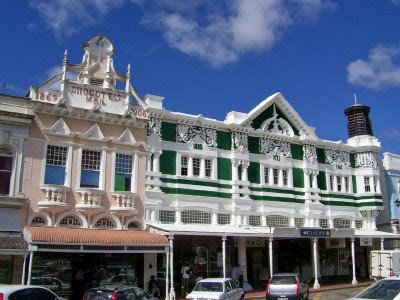 In the centre of Grahamstown around Church Square there are a lot of the old shops of Grahamstown that still sport the facades of old. In recent years there has been one or two fires that have destroyed some of these buildings, but each time they were restored to their former glory. These buildings are still occupied by shops and businesses. In the one case of Burch's Outfitters, the shop still has one of the old money chute and cable system whereby money was sent to a central cashier for payments. Although they use modern tills today, it is still in working condition.
Posted by Firefly the Travel Guy at 9:11 PM