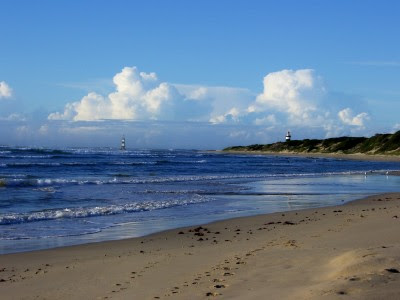 The western point of Algoa Bay is called Cape Recife. The whole surrounding area forms part of the Cape Recife Nature Reserve, but more on that another day. The beach area around Cape Recife is a mixture of sandy beaches, rock shores and reefs. The main reef at the point is Thunderbolt Reef and have become the last resting place to many ships over the years. On the right of the photo is the Cape Recife Lighthouse and on the left is one of the shipping beacons used by ships in the past when navigating into the Bay. 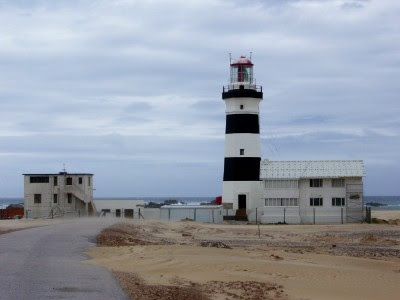 The Cape Recife Lighthouse was commissioned on April Fool's Day, 1 April 1851. It is a 24m high masonary tower built on a rock foundation and has a light of 4 000 000 candle power with a 29 sea mile range. The area around the lighthouse is one of the best seabird and wader watching areas in South Africa. It is also a very popular fishing area with local fishermen.
Posted by Firefly the Travel Guy at 10:31 PM